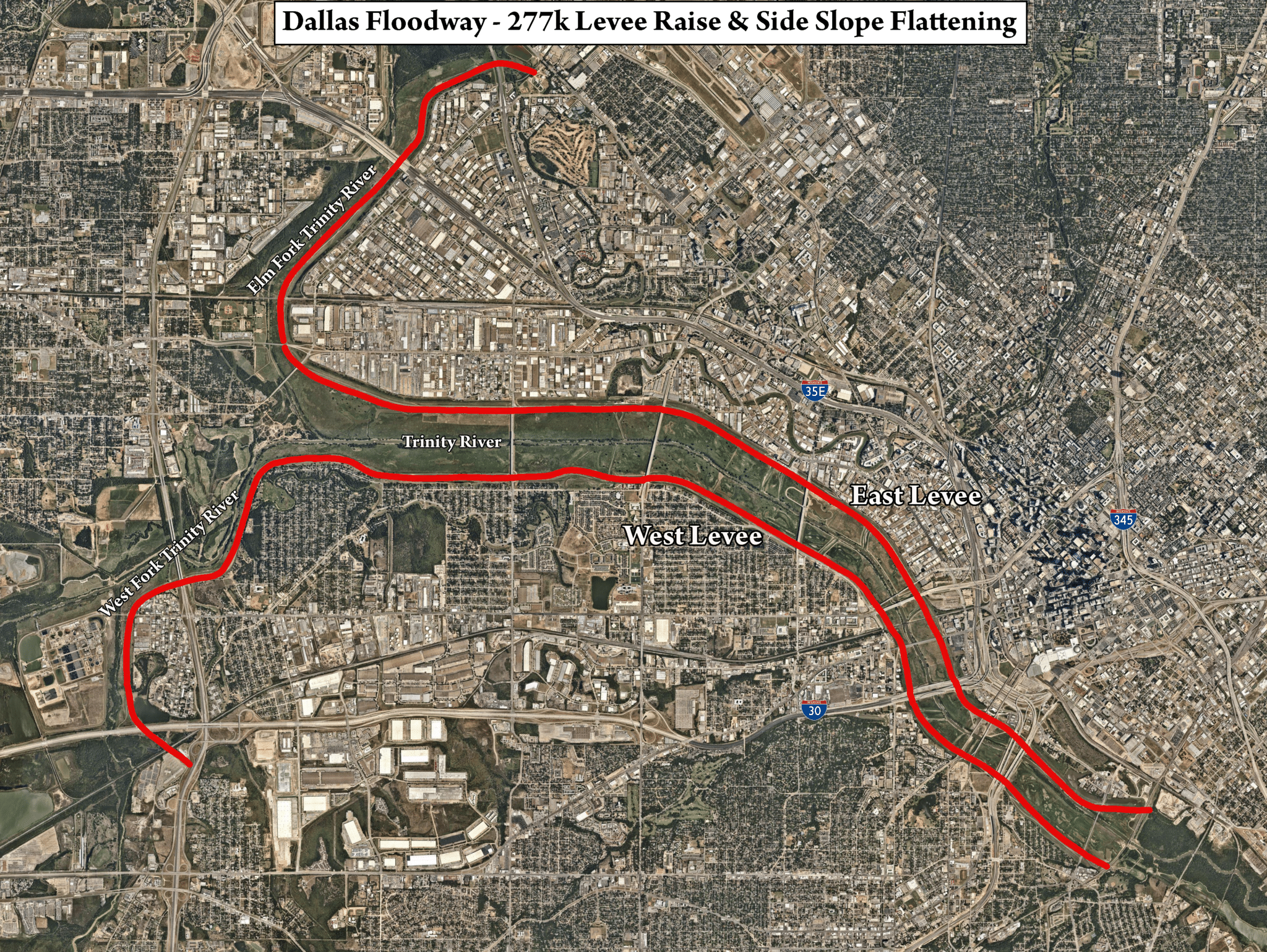 MSMM has been tasked by the USACE Ft. Worth District to develop two stand-alone Design-Build (DB) RFP projects as part of the Dallas Floodway system. The two packages consist of the development of 35% Plans, Technical Specs, a DDR explaining the requirements of the Design-Build firm, a Summary of Work further explaining the project requirements, and a MII construction cost estimate. The $35M Levee Raise project was advertised in March 2021 and the $6M Pump Station project will advertise in first quarter FY22. Services provided included HTRW survey (environmental analyses) of the Delta Pump Station, and a value engineering study that produced two stand-alone Value Engineering Reports.

The 277K Levee Raise project scope consisted of civil design of the existing East and West Dallas floodway levees to raise them to meet a 277K CFS water surface elevation and new levee crest access roads. The levee raises occurred at 25 locations on over 41K feet of levee where the height is less than the required water surface elevation. Our team utilized the Trinity River HEC-RAS models to establish the water surface elevations at each levee station. The project also includes multiple bridge and levee interfaces that include structural bridge sealing plans along the East and West Levees. Additionally, the project included flattening of the levee side slopes to reduce erosion and provide ease of maintenance. The existing East and West levees have side slopes which were as steep as 2:8H:1V. The project will provide all side slopes flattened to 4H:1V along the entire length of the river side. Numerous sluice gate structures and other protective measures were designed to withstand the additional soil loads. The existing access and levee roads will be demolished as part of the raising/flattening of the levees and will be rebuilt in the same location at a higher elevation. Technical specifications were developed for temporary flood protection requirements, stormwater pollution prevention plan and biological and archaeological monitoring requirements. A conceptual level MII construction cost estimate was also provided, reviewed by USACE during the DQC/ATR reviews and updated for the final submission. The team responded to RFI’s submitted during the bidding phase and provided all electronic and physical copies of the final edited submission to USACE.

The Delta Pump Station replacement project consists of a storm water pump station replacement of the high flow pumps and pump house, as well as reuse of the structural chamber. Two pumps and associated bearing lubrication equipment, valves, trash rack, and gates will be housed in the new building. A new electrical room has been incorporated into the building design to house the upgraded equipment, SCADA system and controls. The new Delta Pump House roof is designed to provide access panels for pump maintenance egress and ingress. The civil design accommodates a new debris collection area for small loaders and dump trucks. The trash rack on the high flow culvert will be replaced with a trash rack to dump on the new collection area. The low flow pump stairs will be removed and replaced. Site circulation was designed for access to the low flow stairs from the new collection area. Our team worked with the City of Dallas and Oncor to identify electrical equipment added on site to upgrade the electrical service. The site security fencing and gates will be replaced to secure the site as well as lighting and security cameras. All existing facilities and structures will be demolished. Communication and electrical conduits, transformers, and conductors will be installed or reconnected for service, and coordinated with the City of Dallas. The access road from the pump house to the Canada Drive intersection will be replaced with a 25 foot concrete curb and gutter road. The concrete road is designed to drain to the swale south of the new road through curb openings connected to flume/outfall structures and slope protection. Erosion protection measures have been added at the outfall of the pump station. This is comprised of concrete apron and rock rip-rap.

Our team provided an independent value engineering study via a Virtual Platform. The workshop resulted in development of Design Alternatives (some mutually inclusive) that were selected for incorporation into the design. There were also Design Suggestions that offered measures to simplify construction, provide various means for reducing costs (in these cases these savings are hard to quantify), improve the operational requirements for the facility, and reduce the construction duration. In total, 80 alternatives were developed for the two projects, identifying roughly $11M in cost savings. Following review of the alternatives, $200K in cost avoidance was realized, including changing the Delta Pump Statoin project from a rehabilitation project to a replacement project.