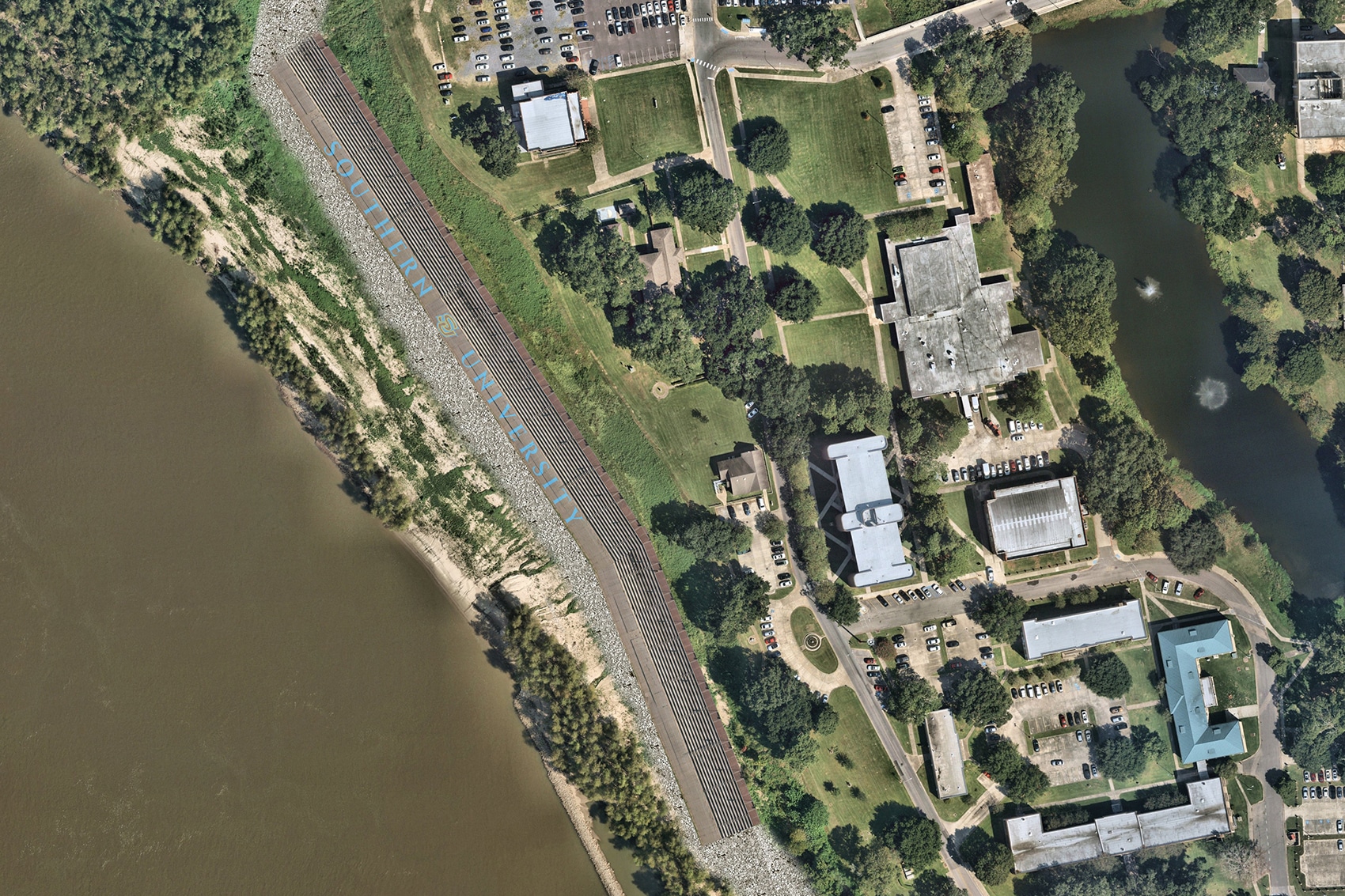 MSMM staff led a Planning Assistance to States (PAS) project to develop a framework of alternatives to address human safety issues plaguing the Southern University Baton Rouge campus. The framework developed presents a concise plan of planning level alternatives, and the final findings, conclusions and alternatives presented will need to be carried forward by the non-Federal sponsor (Southern University) to an engineering and design phase.

The Campus is located on the bank of the Mississippi River in an area known as Scott’s Bluff. It is positioned on the outside bend, or cutting bank, of a 110-degree river bend which makes the river extremely deep with a river bottom exceeding 100-feet below sea-level. Unlike most of Baton Rouge, which is protected by levees, the campus is situated on terrain with a terrace elevation of 65-feet, which is fifty-five feet above a low river stage of 10-feet and twenty feet above a high river stage of 45-feet. The major drainage outfall for the university is a 45-feet deep ravine situated in the central campus area. The ravine has tributary branches which extend north, east, and south from campus. The ravine also serves as the storm drain system outfall for the Scotlandville areas north and east of Southern University. During low river stages, the ravine main stem flows west to outfall into the Mississippi River; during rising river periods, the flow direction is reversed, and the ravine is inundated by riverine backwater.

When the river stage rises, the wake from tugboats creates wave run-up on the riverbank causing erosion and bank loss, and an on-going loss of the terrace along the historic oak trees lining the edge of Scott’s Bluff. Inland, backwater from the river inundates the main stem of the river is high, the subterranean sand strata are charged with water under pressure.

When the river stage falls, rapid drawdown of hydrostatic forces creates soil instabilities on the embankment. With vegetation stunted or destroyed by river inundation, and with frequent Scotlandville urban area storm runoff creating unnaturally high velocity stream forces, the ravine soils are washed away to the river. These combined storm runoff and riverine dynamics are causing active erosion and bank instability conditions in the ravine with severe damage to the University infrastructure as roads and sidewalks are caving into the ravine, and as structures and critical utilities are placed at-risk from ongoing deterioration.

A final report was developed utilizing CAD, GIS and MicroStation to consider the origins and effects of storm and surface waters on campus. With emphasis given to addressing the concerns of the University facility management MSMM identified consequential stream and bank instability and deterioration, with a focus on the lower reach of the ravine and the University bluff area facing the river. The final report includes a list of four (4) discrete problem areas which could be identified as separate projects for funding, analysis, and implementation of construction alternatives. Conceptual drawings were developed and provided in CAD format (AEC standard) and were scaled for reproduction. The final report was provided to Southern University for future implementation, and a graphical depiction of the four identified problem areas.